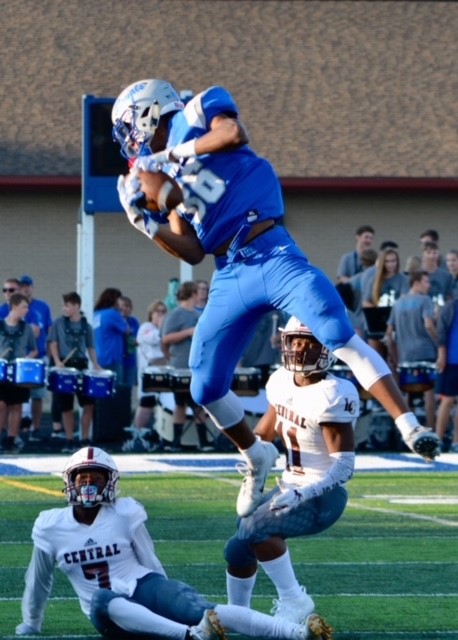 An electric fan base at TCU Field did not leave disappointed after a week one showdown that ended in the Royals’ favor. Penalties, turnovers and explosive plays all contributed to a back-and-forth game, but HSE prevailed 24-20 in a non-conference matchup against the visiting Lawrence Central Bears.

A long offensive HSE drive led to Chris Stein plowing his way into the end zone for the first points of the night. On the ensuing drive, Jake Huston intercepted an LC pass to halt their series. The Royals capitalized on the good field position, as sophomore kicker Alex Geroulis was able to knock in a 30-yard field goal, extending the lead to 10-0.

The Bears responded immediately by putting together an 80-yard touchdown drive to cut the lead, but it did not last long. A few plays later, the senior duo of Andrew Hobson and DeAndre Rhodes connected on a 50-yard touchdown reception, bringing the score to 17-7.

The score stayed that way through halftime and most of the third quarter until LC pieced together an 8-play drive with a touchdown pass, cutting it to a 3-pt game. From there, a stretch of punts went back and forth for both teams. It was not until late in the fourth quarter that the Royals would score their final touchdown of the night. On a fourth and short play, senior tight end Nate Wolf was able to sneak past the LC defenders to come open in the flat. He then made some fancy moves with the ball to find his way into the end zone.

With a minute remaining in the game, LC scored a touchdown but missed its extra point, resulting in a 24-20 score. An onside kick would prove to be unsuccessful for the Bears, and the Royals offense took the field to kneel on the ball and run the clock out.

The HSE Royals take to the road for the first time next Friday, as they travel to face another MIC opponent, the North Central Panthers.