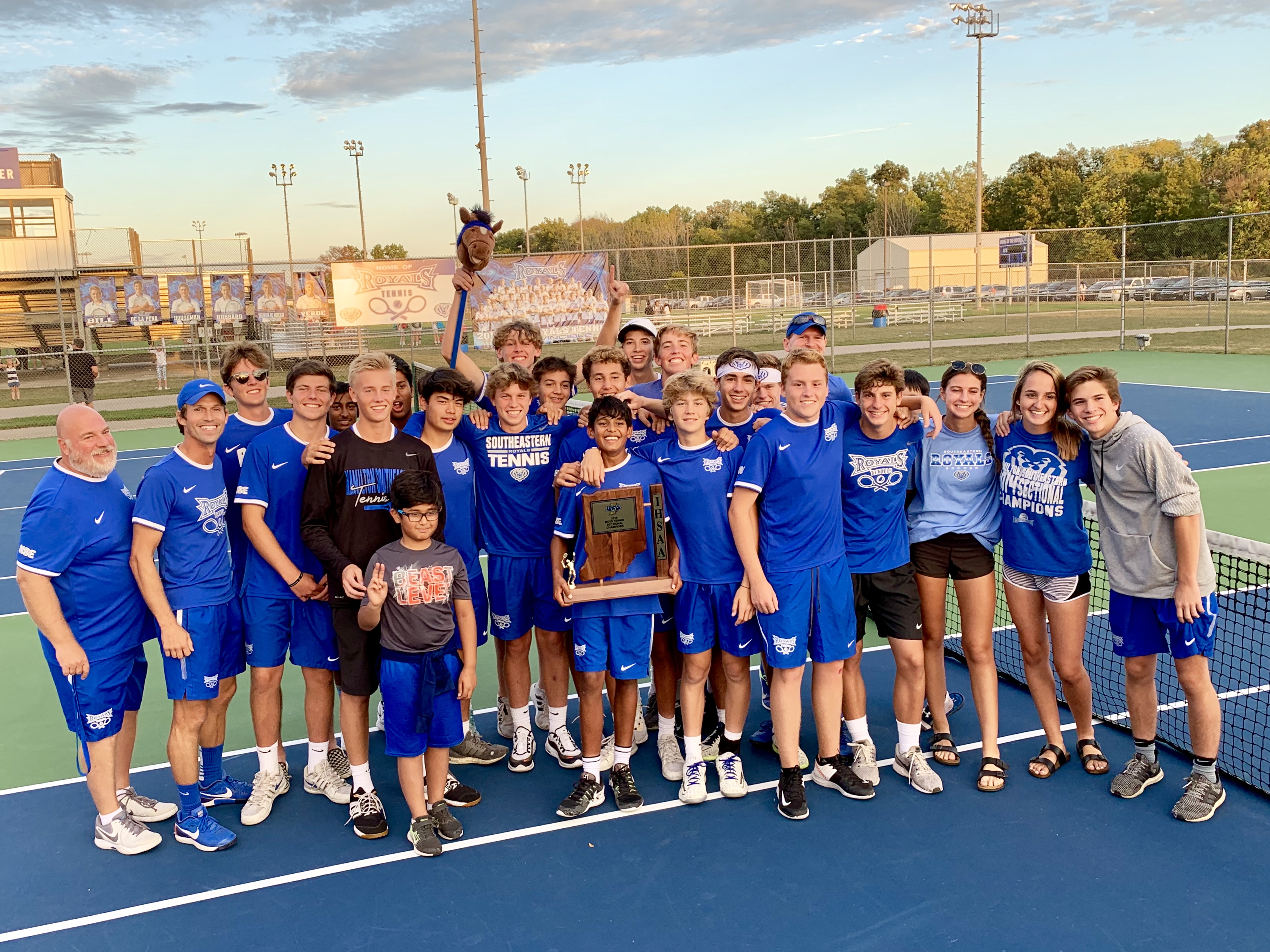 The Royals defeated Fishers 3-2 in dramatic fashion to win the sectional championship! Freshman Rohan Golla had an unbelievable comeback at #3 singles after being down 2-5 in the 3rd set. He fought off a match point along the way to his epic comeback, winning the final 5 games to win 7-5 in the third set. What a clutch performance by the freshman!! Being able to battle through three close sets with so much on the line and especially after dropping the first set and being down 2-5 in the third really shows how mentally tough Rohan is. He never gave up, never got down on himself, and stayed confident in his game, and it paid off for him. He won the match with a score of 4-6, 6-4, 7-5. The other wins for the Royals came from the #2 doubles team of seniors Jackson Bill and Logan Hubbard, winning convincingly, 6-0, 6-4. Everything was firing on all cylinders for Jackson and Logan for the first 10 games, but then they had some trouble closing out the match. Thankfully, they were able to step up in the final few games of the second set to get the win in straight sets. This was a big win for them and avenged their loss at the conference tourney. It was also good for our team’s confidence to get an early win. The other point for the Royals came from the #1 doubles team of senior Daniel Verde and sophomore Andrew Spirrison. They had a back-and-forth battle through the first two sets as neither team could break away. We were able to win a close first set 6-4. However, Fishers struck back by taking the second set 4-6. In the deciding third set, we got off to a good start and never looked back, winning the third set 6-3. This was a big win for Daniel and Andrew as it kept our team alive with Rohan still battling at 3 singles, and I think it even gave Rohan a little confidence and energy boost. Our #1 doubles team has had three really good battles with Fishers this season and being able to win all three matches really says something about their determination and toughness. At #1 singles, junior Andrew Orme played well, but lost to a very tough opponent, 0-6, 0-6. At #2 singles, Paul Schneider lost 1-6, 6-7 (6). I was happy with the way Paul fought in that second set, and it looked like that was going to go three as well, but his opponent came up with some great defense at some opportune times.

Wow, what a match!!! We knew this was going to be a difficult battle, and I’m so proud of the way our guys stepped up tonight. Winning in this fashion was an unbelievable way to recapture the sectional championship after Fishers has gotten the better of us the past two years. The Royals improve to 11-7 on the year and will play in the regional semi-final at North Central on Tuesday of next week against the Mt. Vernon sectional winner. Come out and support your Royals!