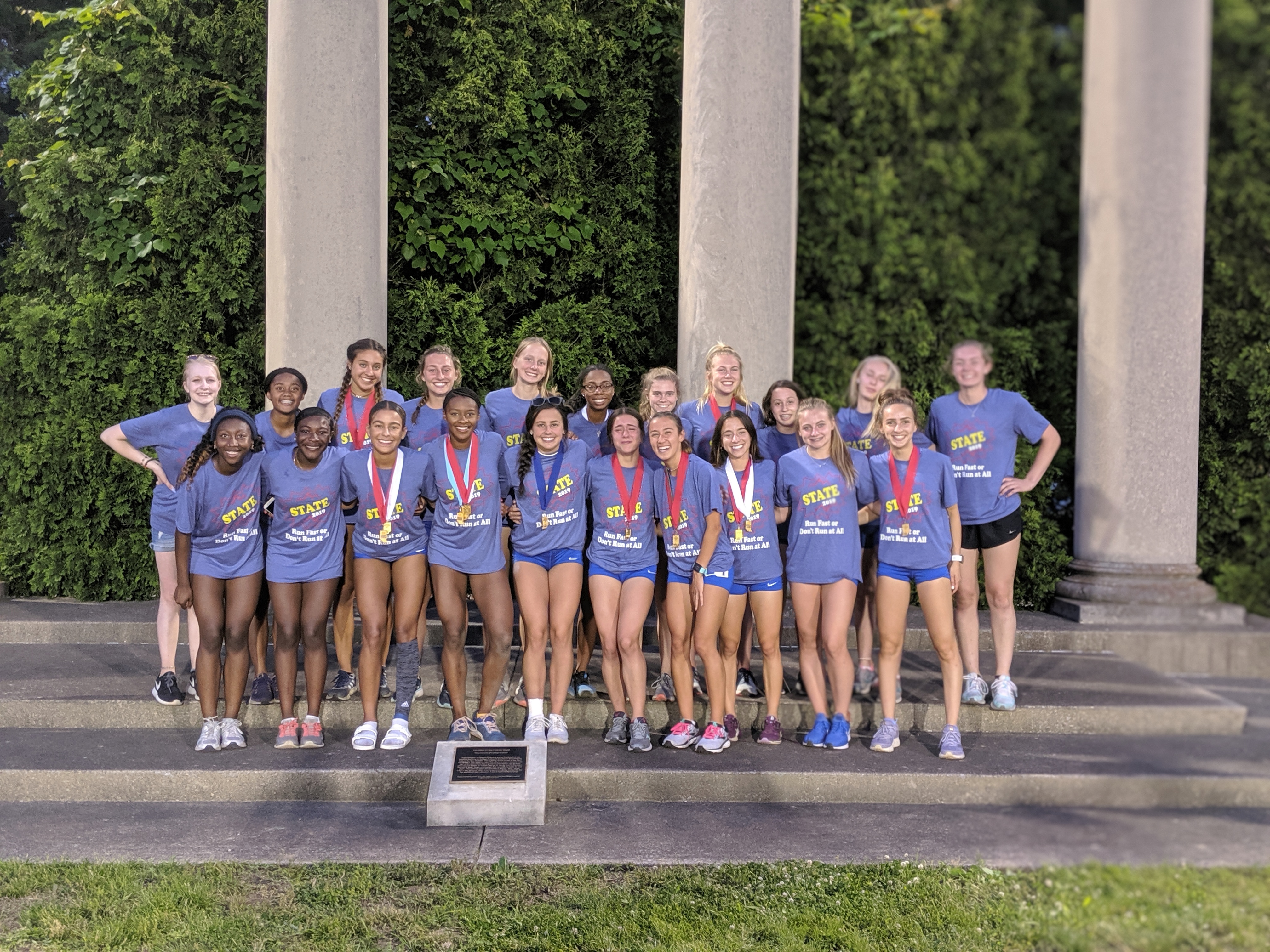 The Lady Royals Track Team placed 3rd in the IHSAA State Track Meet, making 3 top 3 finishes in the last 3 years! The theme for the night was 3 in fact, the team set 3 school records, Kennedy Drish became a 3-Time State Champ, all 3 relays placed in the top 3, and the 4×400 relay team was one of 3 relay teams that ran faster than the previous state meet record!!!! The evening started off well with the 4×800 relay team of Ellie Pedersen, Maddie Mirro, Lulu Black, and Halle Hill earning State Runner-Up! Tierra Sydnor was all-state in the long jump for the 2nd year, placing 7th. Alyssa Barker ran almost a half second PR in the 200 dash to place 12th in the fastest field ever in the event! Next up our own Lauren Johnson sang the national anthem! Halle Hill came back after the 4×800 earlier in the day to finish 11th in the 1600 with a new PR! Next up the 4×100 relay team of Olivia Burgess, Tierra Sydnor, Mya Hammons, and Alyssa Barker ran almost a full second PR for the season finishing 3rd! In the pole vault, which lasted over 3 hours, Kennedy Drish became a 3-TIME STATE CHAMPION clearing a season PR of 12′ 9″. Freshman, Ella Wilhelm also cleared a PR placing 12th in the event. Next on the track, freshman Regan Wans just missed the medal stand by 5 thousandths of a second as she placed 10th in the 400 dash. Our first school record of the night came from Tierra Sydnor in the 300 hurdles as she placed 3rd for her third medal of the night. Maddie Mirro ended an excellent senior season by finishing 17th in the 800. Lulu Black had the next school record of the night as she blazed to a 5th place finish in the 3200 run which again was one of the fastest fields ever! And in the final event of the night, the 4×400 relay team ran a 9 second PR for the season as they battled for the win, but ended up State Runner-Up in a time that was faster than the previous state meet record by 2 seconds and broke our own school record by 6 seconds!!! Olivia Burgess, Mya Hammons, Tierra Sydnor, and Regan Wans all ran a personal best splits as they ran the time that they wrote on the board before leaving for the meet! All in all a great night for the Lady Royals among some really amazing competition!

No Events This Week

Events are added by athletic staff.
View All Events