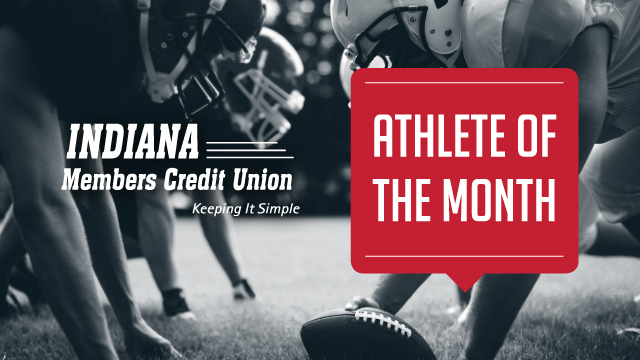 Royals fans! It’s time to vote for the December Indiana Members Credit Union Athlete of the Month. Nominated for Hamilton Southeastern High School this month is:

Keegan had an outstanding December with a highlight of breaking the HSE Natatorium Record in the 100 Free! He did so at the HSE Splash-n-Clash where he also broke a decade old meet record and over the course of the meet had 3 victories in the 4 events he swam. During the month of December, he totaled 11-1st place finishes and scored an amazing 140 points over the course of 5 dual meets. Keegan was also a great team leader during December making sure to foster unity and cohesiveness.

Lydia is by far the most coachable athlete I have ever been around. Further, anytime she plays, her effort is unwavering. Her desire and character are on display at all times, practice or game. Her ability to do all the little things well in a game allow other players to play better. Her effort and her attitude has made our program better every year she has been a Royal. The things Lydia does, will not be replaced anytime soon. She is a tremendous person, student, teammate and athlete. I’ve never coached a player like her in 26 years. She is the exception when it comes to exceptional student athletes.

Molly was impressive during the month of December breaking a meet record at the HSE Splash-n-Clash and also bringing home 7-1st place finishes in just 5 meets. She also led 10 relay teams to victories during that time period. She led the Royals in and out of the pool with enthusiasm and energy.

Robert has moved up to the #1 ranked wrestler in Indiana at 160lbs after his last month’s performances. He has wins over #3, #4, #5, $10 ranked wrestlers in the state.

Peyton is 10-0 in wresting so far this year.

Silas is a basketball player for the Sheridan HS Blackhawks!

through the month of December Chesney played some remarkable basketball. She averaged right at 10 points per game, 4.5 rebounds per game and 3 assist per game. And guarded the opposing teams best players holding them to season lows in each game.

Allie Delph is leading Sheridan High School in scoring with 12.8 points per game and is contributing 4.9 rebounds per game and 3.9 assists per game. Allie has had multiple big games this year and had a season high 21 points in the Tri Central win on Senior day, 20 points against Frankfort in the home opener in December, and 19 points in the loss to Speedway most recently. Allie continues to be a wonderful leader on and off the court all while maintaining a 4.0 GPA, working a part-time job, and continuing to be active with her show animals.